Let me just make this clear up front: I am a registered, dues-paying member of the Libertarian Party. I like this year’s candidate, Michael Badnarik, who just so happens to live near Austin, as do I. Every 3rd party member and activist, however, knows that the 3rd party industry is all but defunct. Ralph Nader’s paltry 5-ish percent in 2000, added to the other 1% contributed by all other 3rd parties, and you see the dismal situation. Nader - through the actions of a Democrat in Green fur, I’ll bet - was not given the Green Party candidacy in 2004! (How many people donated to the Greens between the two elections because of the strength the party gained with Nader’s influence?) With the Republicrats controlling the Presidential debates; with the new, draconian campaign finance laws; with fraud-friendly black box voting; with the tenuous circumstance of 527’s; and with the money machine of the military/industrial/corporate/oil/pharmaceutical/media complex; our abused system is almost completely demolished. Dissent, change, and pleas go unheard.

The gloomy situation leads me to wonder - how can 3rd parties develop an effective challenge to the two major parties. Voting for the lesser of two evils can never bring good. Yet, one can’t help but noticed the divisions within our divisions. Take the Libertarian and Constitution Parties, for instance. Nationally, they have virtually no voice. The crux of the split is abortion. Libs are against government intervention, and on this one issue, Constitution Party members want the government to take control United, the two might poll 1%+ minimum every election cycle, instead of under 1%. That would bring some attention, which could start a snowball.

Jumping to Nader…I was told that he was a Communist, that he wanted the government to take over everything, that he would steal guns from our cold dead hands. Propaganda and lies. I have since read Nader, seen him in interviews, and been in contact with Kevin Zeese, a Nader campaign spokesman, to discuss “Nader doctrine.” That, later; I digress. Did you see Ralph Nader on Bill Maher, at the beginning of August I believe it was? It was the most abhorrent display - but not by Nader. It was during Maher’s round table discussion, and this one was a good one. Maher had Ralph Nader AND Michael Moore on the same show. Liberal TV, certainly, but I’ve heard all three of these men criticize the Democrats. Bill Maher has even suggested that he is a libertarian.

The discussion was lively, but it took a sorry turn. Bill Maher and Michael Moore exposed themselves as unprincipled men who have no self-respect. It went like this. Maher and Moore asked Nader to please quit running so that Kerry would certainly win. Ralph Nader, the honest man of integrity that he is, said that the Democrats were one half of the Globalists’ shell-game. “Well, we know that,” the Democratic Duo said, “but please?” Nader asked them if not he, then who would be a voice against the IMF, G8, the World Bank, the Patriot Act, etc. Then, Bill Maher and Michael Moore actually prostrated themselves at the feet of Nader and began to beg him not to run. Nader respectfully chuckled. I would have done worse.

What were they thinking?! Do they forget that Kerry and Edwards both voted for war with Iraq and the vile Patriot Act. Don’t they know that Kerry/Edwards is funded by just as many special interests as Bush/Cheney. In many cases the global companies finance BOTH sides. So, if Kerry or Bush wins, the same laws keep being passed to help the corporations that fund the political parties that pass the laws. Don’t they know that all four contenders are members of the same secret societies that have been staging wars and oppressing our country for generations? Do you under stand, Billy and Mikey? Closer to home for Maher, who has admitted to smoking pot: Kerry and Edwards (both have also admitted to smoking marijuana) say they do not want to legalize, or even decriminalize the drug. (High Times: Grow America No.2).

If two intelligent, supposedly 3rd Party supporters (Maher and Moore) are so willing to throw every principle they claimed to support through the years out the window, then imagine the mindset of indoctrinated Democrats. Choosing Kerry over any of the other candidates (Kucinich, Sharpton, Dean - my choices, in that order) shows the successful brainwashing of Democrats, just as the choice of Bush over any other contender in 1999, especially McCain, shows the level of mind control influenced upon Republicans. McCain really the only one with an respectable Vietnam record, in all honesty. Kucinich, Sharpton, and Dean were the only real anti-war candidates.

There is more. The two dunces said the reason why they couldn’t support Nader was that he had no chance whatsoever of winning. That, in and of itself, shows the stripes of Maher and Moore, who hold onto a losing attitude before the fight is half over. Nader spokesman Zeese recalled a quote from Eugene Debs - a 3rd Party candidate who ran for president from prison in 1920. Debs: “I’d rather vote for something I believe in and lose than vote for something I don’t believe in and win.” Apparently, that is not Maher or Moore’s life-philosophy.

But, it is what Nader replied that dropped my jaw, and saw me emailing his campaign for information. When told he couldn’t win, Nader said something to the effect that we needed to join 3rd Party forces, and then…maybe. Nader claimed that 3rd parties have been divided by the same issues that the Dems and Repubs have been divided over. There is no reason, he continued, that he wouldn’t join ranks with the far right, who believed in guns or were against abortion. The main issue is fighting the New World Order!

I talked to Nader’s campaign, and yes, he does want to join forces. The biggest concern for him is the dismantling of the same tyrannical, pyramidal power-structure that the fringe-right is always ranting against. With the Illuminati controlling us, taking us to war after war, engineering our economics, the other issues do seem a little smaller. This is our lives we are talking about. I asked the campaign about the charges of Communism. In fact, Nader thinks that the vast sums of money given to the richest entities through corporate welfare is already inherently communistic, and is a bane to Small Business. If he had his way, he would give that money to us, citizens who work to be their own bosses, who want to better the communities voluntarily. By the time we get to taxes, we won’t need very many. Nader would dismantle the war machine. Small businesses will provide jobs to people of all races, religions, and blood types.

Libertarian sympathizers will disagree with any give-away economic policy, because it still calls for taxation and redistribution of the wealth. I agree. To these brethren, I say the following. They aren’t going to stop taking the taxes yet. So, if they are going to keep taking our money, shouldn’t it be distributed to the small businesses and hard-working entrepreneurs? The other option is to keep taking it from the entrepreneurial spirits and doling it out to the richest companies as bail-outs, welfare, the fifteenth bankruptcy after a multi-billion dollar, record-setting year, or no-bid contracts. Given these two options, it shouldn’t be hard to choose. Then, once we get the money, build up our enterprises, the right and left can meet to hash out domestic issues. Without our European, aristocratic Guv’nas twisting and smashing everything beyond any semblance of sanity and rationality.

Maybe we would finally get to have real debates over our domestic ills. We certainly wouldn’t be at war. That is a common value that we must latch onto, use as a mantra for unification. No War! Libertarians, Greens, Constitutionalists, and most the other 3rd Party field are anti-war. We are not going to get real reform for the courts, for the schools, or for anything else until we detach ourselves from this imperialistic urge we have given into ever since the Globalists took control, right before World War I. Since that time, have we ever not been at war?

Here’s my idea for 2008. Nader for President. He deserves it. Ralph Nader has been the beacon for the 3rd Party field the last two cycles. He received the highest percentage of all 3rd Party candidates in 2000, and will do so again in 2004. So, hands down, Nader should be President. For VP, the Libertarians would choose. This is not bias. The Libertarians, I believe, are the oldest 3rd Party, and have the most local elected officials in office. Michael Badnarik will most likely be on the ballot in more states than even Nader in 2004. This is due to the Libertarians’ methodically-built grassroots movement.

From here, Nader will break with tradition and announce his Cabinet before the election. Secretary of State will be touchy vetting. This office has more power than does the VP. Jesse Ventura would be a good choice. In fact, if he were to join with us, the Reform Party could get the VP nod, and the Lib could be Secretary of State. On down the line. The Constitution Party controlling the Secretary of Defense’s quarters would be logical. They don’t want war, and are against the war in Iraq. However, if someone did attack us, we could count on them to take Biblical justice. I assure you it would be against the people who attacked us, and not a rogue country with whom someone’s daddy has a vendetta against. This would take us out of foreign entanglements, thus slashing the cost of our Defense Department.

On down the line, each 3rd Party being appointed for high office before the election. Each 3rd Party represented. Each 3rd Party’s constituents will vote for The Third Party 3rd Party. Then there will be the publicity. Try as they might, the Republicrats will not be able to stifle this kind of media attention. It would be at this point that we could give a viable alternative to lesser evil-ism. Nader could ask disenfranchised Democrats AND misled Republicans to join The Third Party 3rd Party. They will be represented by someone, in some high office.

Oh, it would be glorious. I’ve been in the music business. I always wanted to throw a concert on the same day in all fifty State capitals. We could have a Rage Against The Machine reunion for the California concert. The Dixie Chics (if they haven’t been seduced by the Democrats yet) could play in Texas. We could have Nader speak in New York, Ron Paul rejoining the Libertarians and speaking in Florida, Buchanan in the Bible Belt. A whole day event, a month before the election. Then again, I’ve been told that I dream far too much.

As for 2004, my mind is still open. It would feel wrong not to support Badnarik. Nader, however, is calling for a unified front. This is a war. The empire has subverted our political system. We need a champion, and Nader just might be the one. 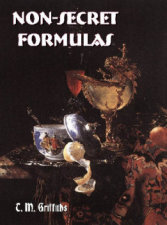