The following is excerpted from: New World Vistas: Air and Space Power for the 21st Century Ancillary Volume Document courtesy of International Committee for the Convention Against Offensive Microwave Weapons and Resonance magazine.

Looking 50 years into the future is extremely easy and, at the same time, exceedingly difficult. Easy, since I will not be around to catch the flak for being wrong. Difficult, since it is really presumptuous to pretend that you have the vision to see the future. Nonetheless, you asked for it so here goes.

As we look forward to the future, it seems likely that this nation will be involved in multiple conflicts where our military might cannot be applied. We will be involved intimately with hostile populations in situations where the application of non-lethal force will be the tactical or political preference. It appears likely that there are a number of physical agents that might actively, but largely benignly, interact or interfere with biological processes in an adversary in a manner that will provide our armed forces the tools to control these adversaries without extensive loss of life or property. These physical agents could include acoustic fields, optical fields, electromagnetic fields, and combinations thereof. This paper will address only the prospect of the physical regulation of biological processes using electromagnetic fields.

Prior to the mid-21st century, there will be a virtual explosion of knowledge in the field of neuroscience. We will have achieved a clear understanding of how the human brain works, how it really controls the various functions of the body, and how it can be manipulated (both positively and negatively). One can envision the development of electromagnetic energy sources, the output of which can be pulsed, shaped, and focused, that can couple with the human body in a fashion that will allow one to prevent voluntary muscle movements, control emotions (and thus actions), produce sleep, transmit suggestions, interfere with both short-term and long-term memory, produce an experience set, and delete an experience set. This will open the door for the development of some novel capabilities that can be used in armed conflict, in terrorist/hostage situations, and in training. New weapons that offer the opportunity of control of an adversary without resorting to a lethal solution or to collateral casualties can be developed around this concept.

This would offer significant improvements in the capabilities of our special operation forces. Initial experimentation should be focused on the interaction of electromagnetic energy and the neuromuscular junctions involved in voluntary muscle control. Theories need to be developed, modeled, and tested in experimental preparations. Early testing using in vitro cell cultures of neural networks could provide focus for more definitive intact animal testing. If successful, one could envision a weapon that would render an opponent incapable of taking any meaningful action involving higher motor skills, (e.g. using weapons, operating tracking systems). The prospect of a weapon to accomplish this when targeted against an individual target is reasonable; the prospect of a weapon effective against a massed force would seem to be more remote. Use of such a device in an enclosed area against multiple targets (hostage situation) may be more difficult than an individual target system, but probably feasible.

It would also appear possible to create high fidelity speech in the human body, raising the possibility of covert suggestion and psychological direction. When a high power microwave pulse in the gigahertz range strikes the human body, a very small temperature perturbation occurs. This is associated with a sudden expansion of the slightly heated tissue. This expansion is fast enough to produce an acoustic wave. If a pulse stream is used, it should be possible to create an internal acoustic field in the 5-15 kilohertz range, which is audible. Thus, it may be possible to "talk" to selected adversaries in a fashion that would be most disturbing to them.

In comparison to the discussion in the paragraphs above, the concept of imprinting an experience set is highly speculative, but nonetheless, highly exciting. Modern electromagnetic scattering theory raises the prospect that ultrashort pulse scattering through the human brain can result in reflected signals that can be used to construct a reliable estimate of the degree of central nervous system arousal. The concept behind this "remote EEG" is to scatter off action potentials or ensembles of action potentials in major central nervous system tracts.

Assuming we will understand how our skills are imprinted and recalled, it might be possible to take this concept one step further and duplicate the experience set of another individual. The prospect of providing a "been there-done that" knowledge base could provide a revolutionary change in our approach to specialized training. How this can be done or even if it can be done are significant unknowns. The impact of success would boggle the mind!

The Bridge to Infinity - Bruce Cathie 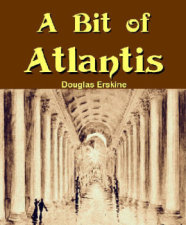